Festival at the Edge (FatE) is really pleased to announce our latest commission, a new and exciting community-based project. This project will culminate in a live performance combining the original stories of pupils from Farlow Primary School Shropshire, with biographical details of a well-loved local, Simon Evans (10th August 1895 – 9th August 1940) Simon was a well-known local postman who after suffering physical and emotional injuries in the trenches of World War One moved to Cleobury Mortimer to recuperate and regain a sense of well-being.

In 1928, he won a scholarship offered by the Union of Post Office Workers to enrol on a correspondence course in English at Ruskin College, Oxford. This was to prove a turning point in his career, as it opened the door to literature, and led to his becoming a published writer and broadcaster. Much of his work focused on country life and the deep natural beauty of South Shropshire.

After some fantastic expressions of interested were received from practitioners all around the U.K., FatE awarded the commission to Storyteller and former teacher Maria Credali. 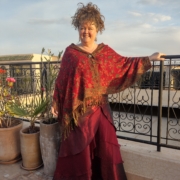 Maria will be researching Simon Evan’s live and work, his archives and personal affects, and inspiring children to create their own fantastic stories based on his life and the wider themes raised. The commission will culminate with a live joint performance with the pupils and Maria, at Festival at the Edge on Saturday 16th July 2022.

We hope you can join us for this and also an array of other fantastic stories and songs from these shores and beyond throughout the festival weekend.

This project is made possible by a Lottery Grant via Arts Council, England